My Independence day, well it was for a while. My daughter was born on the 4th July, 22 years ago. We already had a 2 year old son and we decided that was it, no more kids, so the 4th of July was going to be my independence day.
Well you know what they say about best laid plans, we had another beautiful girl 6 years later. Sometimes it's nice things don't work out exactly as you plan them. The older two doted on their little sister and the two girls get on really well.


The pic on the left was taken on holiday 7 years ago. The photo on the right earlier this year.
They have changed a lot but still like to pose for the camera and Natalie's little sister is taller than her now.

I didn't make it to last weeks Handmade Monday as my Dad was taken to hospital and I was visiting him everyday until he came out on the Tuesday. His calcium levels were dangerously low and he was lucky they caught it early. As he is on warfarin he has to have a blood test once a week and it was picked up. He's OK now and we are all going to Weymouth for the day on Tuesday. 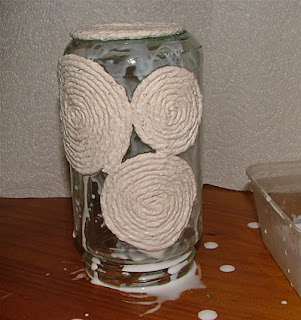 I haven't managed much in the way of crafts but I have made a few candle holders out of some old jars.

I haven't got any photo's of the finished jars yet but I took step by step photo's to add a tutorial to my website.

These will be used outside and should keep the candle's protected from the wind as well as being reasonably safe if they fall over.

I will post the finished pics as soon as I get them up on my site.

Do pop over to Wendy's 1st Unique Gifts and take a look at all the other crafty blogs that take part in Handmade Monday.

Visit our website, using one of the links below, to find some great craft ideas for you to try.